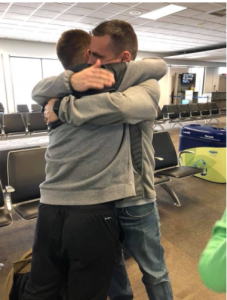 On February 5, only 5 days before Senior Night, Ethan Savey had to say goodbye to his dad who had to leave for a year-long deployment in Korea. Though Savey was heartbroken that his dad and greatest mentor couldn’t walk with him to be recognized for his athletic accomplishments, Savey’s mom, brother, sister, teammates, and community came around him to celebrate him as his senior basketball season came to an end.

“Ethan’s a great teammate who works hard and always does what’s best for the team,” says Junior Brendan Labensky, who has played with Savey in football and basketball. “He makes everyone feel welcome and is very likeable. On the football field he is elusive and shifty, and has great hands, and on the basketball court he has a quick first step which sets his teammates up for success.” Senior Jack Campbell appreciates how Savey is always willing to help guys around him by giving them rides to practice and bringing great energy and attitude. “As a player he’s a great scorer,” Campbell points out. “He’s explosive and when he gets the ball he can give us quick offense. He’s also a good defender with his energy and he gets a lot of steals. Love playing with him.”

How did your senior night differ from how you pictured it would be?

It was very tough to find out that my dad wouldn’t be able to walk with me on my Senior Night. Before I found out, I pictured Senior Night being a very proud moment where the person who has been my biggest supporter and has taught me everything I know about the sport would be able to walk across the court with me before my final home game. The hardest thing to think about is that he deserved the opportunity more than anyone in the world, but he was forced elsewhere.

How has being in a military family affected how you’ve grown up? Would you change anything?

There is nothing I would change in my childhood. Although being a military family comes with tough situations like moving every year and sending your dad off to Afghanistan for multiple months, it has helped to make me tougher, more responsible, and has ultimately brought our family closer together.

How has your dad been able to support you in your athletic career through the years?

My dad has been THE support of my athletic career. He has taught me everything I know about basketball and is the biggest motivation for me to do well in my senior year. My dad was always the most excited guy in the crowd and I will for sure miss having him there.

What do you think is one of the most powerful things your dad has taught you in your life?

Toughness. His deployments are hard on the rest of the family but I haven’t thought until recently about how much worse they are on him. He never showed how scared and sad he was when he gave us the news. His toughness allowed for us to be at peace because through his actions, he said that everything was going to be fine. This is something that I will remember for a long time.

Future College/Major: Aerospace Engineering at the University of Tennessee

Toughest opponent/why? Franklin. It has always been a huge game, so both teams are always pumped up.

Words you live by: “Work smarter, not harder.”

Biggest influence/why? My dad: he has taught me everything I know about sports and life and has been a friend to me in every situation.

I am most annoyed by: Whole Foods

In 10 years, I’ll be: designing rockets for SpaceX

Best thing about sports: Relationships made with teammates

Love to trade places for a day with: Pterodactyl

Best life lesson you have learned from a coach? Be tougher than any competition

One of your favorite memories from football: Shutting out Oakwood two years in a row

One of your favorite memories from basketball: Beating Franklin at home sophomore year

Advice you would give underclassmen: Cherish every second