“A simple yet proud farmer in the year 1922 conspires to murder his wife for financial gain, convincing his teenage son to participate.” – synopsis from IMDb 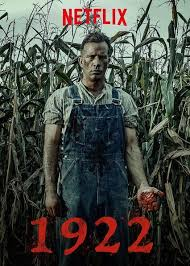 Stephen King is an author famous for his prolific and individually terrifying tales. He has published 54 books, many of which have been adapted into television or movies. Along with the recent theatrical release of It, his novella 1922 also got the Hollywood treatment in a recent movie release on Netflix, which is just in time for Halloween.

As one might expect from a Stephen King story, it is absolutely twisted and terrifying. 1922 follows the story of farmer Wilfred James (Thomas Jane), his wife Arlette (Molly Parker), and son Henry (Dylan Schmid) through the year 1922. This Golden-age rural backdrop sets up a beautiful juxtaposition for the sinister plot that unfolds. Arlette is a woman who inherited farm land from her father and intends to sell it in order to move to the city and live out her dreams as a dress shop owner, much against the wishes of Wilfred and Henry who deeply love the farm. The story turns gruesome when Wilfred takes matters into his own hands, literally, and kills Arlette after he fails to convince her not to sell.

The story chronicles the horrific events that follow, narrated by Wilfred himself years after the year 1922 takes place in a letter intended to serve as a confession to the world. Wilfred describes 1922 as the year that ruined his life, and after watching the movie you might agree. He writes of being haunted by rats, which infest his house after Alrette dies, the brutal deaths and mutilation of livestock, the rebellion of his son Henry who spirals into depression, and a bitter, lonesome winter spent nearly frozen to death. All of this culminates into a supernatural ambience and leaves you with an ending guessing at the meaning of it all.

If you’ve read the story before, give this movie a shot. The movie doesn’t fully add up to the book but it is still an enjoyably terrifying piece to watch on screen. I would suggest this movie to those who enjoy psychological thrillers because of it’s uncomfortable, chilling aura that leaves you thinking about Wilfred’s downfall long after the credits role.

This movie is available on Netflix.