Jack Long and Meghan Malas get comfortable in their WYSO studio before recording for Dayton Youth Radio. 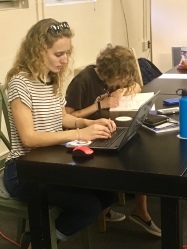 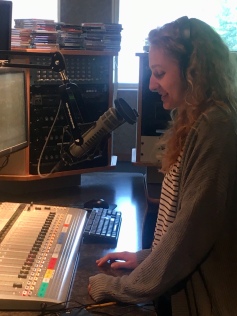 For the past eight weeks, some students at Bellbrook High School have been working on stories for a project called Dayton Youth Radio, with the help of WYSO’s Basim Blunt.  The project started when seniors Jack Long and Meghan Malas went to the WYSO Yellow Springs station to conduct research for the school podcast, The Egg. While at the station, the two learned of the Dayton Youth Radio program, which has been giving voice to Miami Valley teens since 2014.  Each year, Blunt, who acts as project coordinator and producer on all the stories, travels to various schools and teaches students about broadcasting and storytelling.  Long and Malas returned to BHS and informed Ms. Bills-Tenney, who acts as newspaper advisor, about the opportunity that Bellbrook students could have.  Not long after that, Bellbrook joined a long list of schools to participate in Dayton Youth Radio.

The stories that students write can be about anything at all, as long as the student is passionate about it, a challenge that Bellbrook students rose eagerly to.  Story topics ranged from personal experiences on mission trips to complicated family relationships, with each one being unique in its own right. The class consists of eight sessions, with Bellbrook students meeting each Monday after school.  Recording equipment was brought in for interviews to be conducted, before finally going to the studio and recording. The stories will now be played on 91.3 FM WYSO at 5:44 pm on Thursdays, 7:44 am on Fridays, and 10:44 am on Sundays from May 24-June 10. The rest of the stories will air after Labor Day in the fall. Additionally, the stories can be found at WYSO’s website, at the link provided:   WYSO Dayton Youth Radio